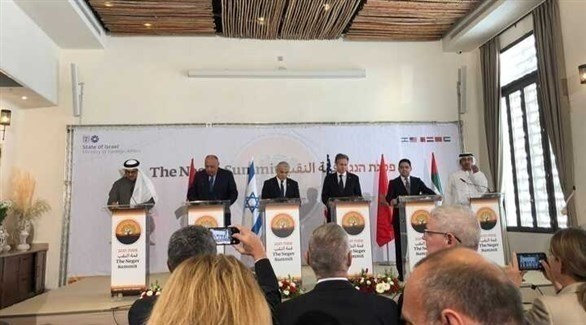 Israeli Foreign Minister Yair Lapid stressed on Monday that the deepening of the alliance between Israel and the United States and several Arab countries “intimidates and deters” Iran as the Jewish state organizes a meeting described as historic in the desert of Negev.

The foreign ministers of the United Arab Emirates, Bahrain, Morocco, Egypt, the United States and Israel met at the “Sde Boker” spa in the Negev, and all of them began their speeches by condemning the deadly attack in the city of Hadera (north), calling it of “terrorist”.

The attack claimed the lives of two police officers, a young man and a woman with dual French and Israeli citizenship.
On Monday, ISIS claimed responsibility for the attack, which was praised by Hamas, Islamic Jihad and Lebanon’s Hezbollah.

“We are writing history here and establishing a new architecture based on progress, technology, religious tolerance, security and intelligence,” Lapid said.

Diplomatic sources indicated that the discussions focused on the issue of reactivating the Iranian nuclear agreement.
The European Union’s foreign policy official said on Saturday that the nuclear deal with Iran could be signed within days.

Israel adamantly refuses to renew the deal, fearing that its archenemy Iran might acquire a nuclear bomb. Tehran denies this and says its nuclear program is for civilian purposes.

The United Arab Emirates and Bahrain are the first two Gulf states to normalize relations with Israel in September 2020 under the US-brokered “Abraham Accords”, followed by Morocco and Sudan.

Egypt preceded them by signing a peace treaty with the Hebrew state in 1979 and with Jordan in 1994.

US Secretary of State Anthony Blinken stressed that the Abraham Accords “are not a substitute” for moving forward in resolving the Israeli-Palestinian conflict.

Blinken said that the gains made by the agreements “are not a substitute for progress between the Palestinians and Israel.”

On a hill facing the Negev tourist hub, activists raised Israeli and Palestinian flags and banners in English, Hebrew and Arabic “Didn’t you forget anyone?”

The blue and white banners are signed with Women Making Peace and Women of the Sun, two feminist organizations that work for peace and seek to end the Israeli-Palestinian conflict.

The flags of the participating countries were raised in front of the entrance of the resort.

On Monday morning, Prime Minister Naftali Bennett’s office confirmed that he had contracted the Corona virus, hours after he met with the US Secretary of State and held a joint press conference without wearing masks.

But Bennett’s office confirmed that he is in good health and continues to work from home and as planned.

On Monday, Blinken, who arrived in Israel on Saturday, was seen doing his morning exercise and jogging around the compound.

The Negev summit coincided with Jordan’s King Abdullah II’s visit to Ramallah, where he met with Palestinian President Mahmoud Abbas.

According to the official Palestinian news agency (Wafa), the Jordanian monarch assured the Palestinian president that “the region cannot enjoy security and stability without a just and comprehensive solution to the Palestinian question based on a two-state solution that guarantees the establishment of an independent Palestinian state on the 1967 borders with Jerusalem as its capital”.

Abbas had refused to condemn the Russian invasion, and during his meeting with Blinken on Sunday night, he criticized the West, accusing it of “blatant double standards despite the crimes of the Israeli occupation amounting to ethnic cleansing and racial discrimination.” “.

The Negev meeting comes at a time when Middle Eastern countries have generally disappointed the United States and European countries by failing to take a decisive stand on Russia’s invasion of Ukraine, which began on February 24. (February 24th)

Blinken added during his press conference with Lapid that the administration of US President Joe Biden believes that “returning to the full implementation of the agreement is the best way to re-constrain Iran’s nuclear program”, to return to what was before Washington withdrew from during the era of former President Donald Trump in 2018.

“When it comes to what is most important, we are fully agreed, committed and determined to ensure that Iran never acquires a nuclear weapon,” Blinken said.

For his part, Lapid referred to a “disagreement on the nuclear program and its results” with Washington, “but we have an open and frank dialogue.”

“Israel and the United States will work together to prevent Iran from acquiring nuclear weapons, but Israel will do whatever it deems necessary to stop Iran’s nuclear program,” he added.

Israeli and Palestinian sources expressed fear of an uptick in tension during the month of Ramadan, and considered that the Jordanian monarch’s visit came in an attempt to defuse the expected tension, especially in Jerusalem during prayers at the Al-Ahmad Mosque. Aqsa during Ramadan.

Tensions in East Jerusalem during the month of Ramadan last year fueled the conflict and led to a bloody escalation with the Gaza Strip that lasted 11 days.