A bold decision by Mercedes regarding its autonomous cars… What is it? 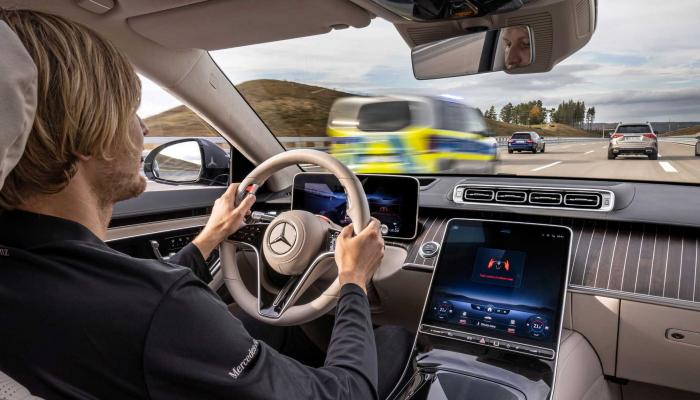 So far, self-driving cars are an obsession with automakers and car owners alike, following reports of accidents caused by cars with these systems.

At the same time, the Mercedes brand announced a bold decision expressing its confidence in the autonomous driving systems it plans to introduce in its modern car in the future.

With this decision, Mercedes assumes all legal responsibility for any accident that its cars may be exposed to while driving with the autonomous driving system, and therefore exempts the driver and the owner of the car from any responsibility that may be faced. once you’re in the driver’s seat. .

According to the “Motor One” website, Mercedes is adopting the advanced SAE Level 3 autonomous driving system in its future cars, starting from the third level.

The system will appear in cars from the German brand that will be launched on the US market in late 2021.

The system allows complete non-interference by the driver of the car while driving and full control of the vehicle’s autonomous driving system.

During the past 2021, on the other hand, Tesla experienced a big problem due to the autonomous driving system (Auto Pilot), which caused numerous accidents.

Tesla is facing charges in the United States over its “AutoPilot” system, which gives drivers a false sense of security, according to messages from senators.

The Tesla system caused 11 accidents, and after those accidents, the US Highway Traffic Safety Authority opened a preliminary investigation into the automated driving system of Tesla cars.

According to the US National Highway Traffic Safety Authority, “crashes dating back to 2018 included one fatal crash and seven others resulting in injuries.”

The attack on Tesla cars powered by this system has increased after a video of a test by Consumer Reports showed that the self-driving system can cheat if there is no driver behind the wheel, which is also shown in videos. widely spread on Tik. Tok and other social platforms.

A spokesman for the National Traffic Safety Authority said: “An initial assessment initiates the authority’s fact-finding mission and allows for the collection of additional information and data.”

The spokesman pointed out that the authority “reminds citizens that no motorized vehicle currently on the market can drive itself.”

Democratic Senators Richard Blumenthal of Connecticut and Ed Markey of Massachusetts called in the Highway Safety Authority in April 2021 to investigate a fatal crash in Texas involving a Tesla, which authorities say occurred with no driver behind the wheel.