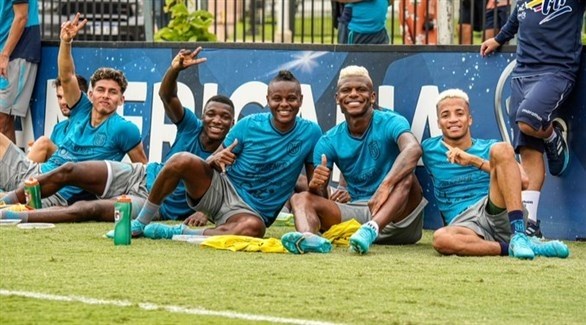 Five teams compete to join Brazil and Argentina at the FIFA World Cup in Qatar, when the penultimate qualifying round takes place in South America.

Ecuador, Uruguay, Peru, Chile and Colombia still have options to qualify for the final later this year.

Brazil and Argentina have already qualified, while third-placed Ecuador with 25 points has a three-point lead over Uruguay and their place in the final will be confirmed if they eliminate Paraguay, whose hopes are over, from their stadium.

The winners of the first four places qualify directly for Qatar, while the fifth placed in the world playoff against a team from Asia.

Uruguay, which is the only one that won the World Cup in South America with Brazil and Argentina, will receive its rival Peru and seeks to qualify directly.

Uruguay have won the last two games under new coach Diego Alonso, one point ahead of Peru and three points over Chile, whom they face at the end of the qualifiers.

“Perhaps I will play the two most important matches (of my international career) because they represent the opportunity to qualify for the World Cup again,” said Uruguayan striker Luis Suarez.

Chile, which faces Brazil at the Maracanã on Thursday, will need a historic achievement if it is to maintain its hopes of qualifying.

Brazil have never lost a home qualifier and Chile must pick up all three points to keep their hopes alive before facing Uruguay in the knockout final next Tuesday.

“The statistics are there to break them. We have to put in a great performance to win this match, undermine (Brazil’s) strengths and take advantage of the opportunities we have,” Chile coach Martin Lasarte said.

Colombia will need a miracle not to miss out on the final for the first time since 2010.

Colombia have not managed to score any goals in the last seven qualifying games, but they have an easy task against Bolivia, who have the weakest defensive line and have been confirmed out of the competition.

“We are aware of our current situation. The tie taught us that things can be decided at the last minute. The important thing is to be convinced and believe in that”.

Argentina, second behind Brazil, plays Venezuela, the only country that has never qualified for a World Cup final, in Buenos Aires on Friday.