27 cities without drinking water amid heatwave: ‘We’re a dung heap’ 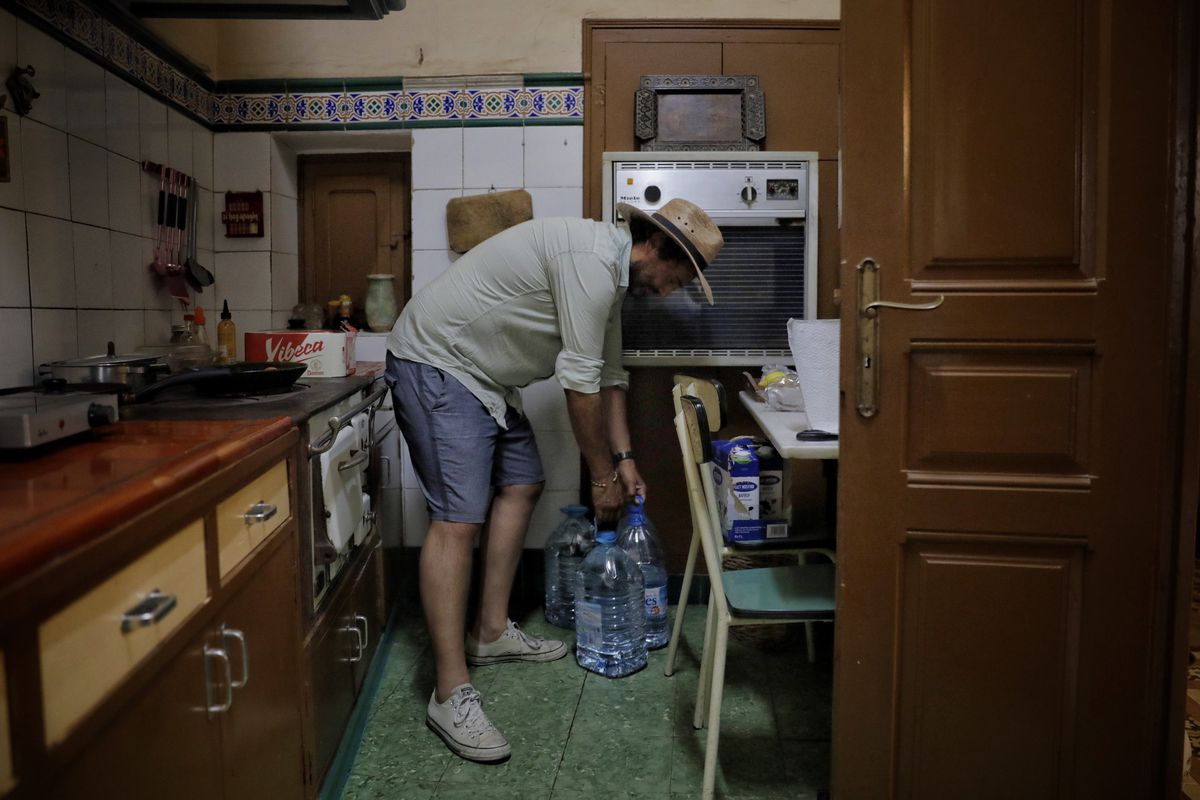 The main square of the small town of Bovera (Lleida) is called La Bassa (the raft in Catalan). The name almost sounds like a mockery considering that drinking from its two springs has been banned for two weeks. Above them, a sign warns: “Non-potable water”. Both mouths are wrapped in fluorescent tape as a warning, which police use to cordon off a crime scene. It’s not like there were any in the city, although the 230 neighbors feel like they’ve been the victim of a criminal environmental crime. “We are Lleida’s dung heap,” sums up one of them, who prefers not to reveal his name (“everyone knows each other here”, he justifies himself), after cheerfully criticizing the mismanagement that has led to more in the 21st century More than 20,000 residents in 27 communities in rural Catalonia have been without drinking water for two weeks because a nearby reservoir has been contaminated with herbicides. A situation that has worsened with the heat wave.

“I’ve never seen anything like it,” says the old man from the door of his house, who bought a pallet of 250 liters of bottled water to cook and shop all summer long. Another neighbour, sheltered in her portal, is preparing her van to go to Lleida, 45 minutes by car, and says she will use the drive to buy bottles. Queviures Maria Àngels, the city’s only grocery store, closes in the afternoon. “I have the feeling that it will stay,” explains the woman in front of her garage and says that she has gotten so used to the situation that she forgets it for a moment. “Sometimes I brush my teeth and then I remember [de la contaminación]. I quickly spit the water out of my mouth,” he adds, as the mercury tops the 40-degree mark.

Òscar Acero, mayor of Bovera and apparently the only neighbor willing to speak by his first and last name, asks the Generalitat to declare the emergency zone in Les Garrigues, an empty region of Catalonia surrounded by windmills and fields used by depopulation and aging were plagued. “If this had happened in Barcelona’s Eixample, the problem would have been solved in hours,” laments the mayor of an area already accustomed to agricultural and industrial contamination. “I better not speak. I would say too much,” says another neighbor succinctly while checking a tractor in a garage.

It’s not the first time that agriculture has risked Lleida’s waters. In early May, the same communities were without a supply of drinking water for five days after the Catalan health authority found high levels of a herbicide used in the fields surrounding the mighty Segre River. Just two weeks after the first alert was deactivated, the government reactivated it after again finding levels incompatible with human consumption in the Utxesa reservoir, which feeds a region where tourist records and their millions never arrive. “The feeling is abandonment. Of course, in a few months, the parties will campaign for the municipalities,” complains the mayor. Last year, another hydrocarbon spill in the area also forced a consumption ban.

Sources from the Generalitat’s Ministry of Climate Protection and Agriculture admit that this problem (“diffuse pollution”, as they call it) is widespread in the Lleida plain and that if pollutant concentrations have increased so much this year, this is due to the drought “Because there is less water, the concentrated values ​​have increased”, they add. During the first episode of contamination in May, cordiality prevailed between the affected councilors and the government. But the explanation of another episode was the straw, dirty, that broke the camel’s back. Some consistories this week accused the Catalan Water Agency (ACA), the body in charge of water management for the Generalitat, of “inaction and apathy”.

Last Tuesday, in an interview with the Catalan news agency, the director of the ACA, Samuel Reyes, replied to the mayors that the law stipulates that the city councils, in particular the Les Garrigues water board, are responsible for ensuring the supply. And he accused that body of not accepting the $100 million in aid it had offered in the area to improve drinkability. “Besides, it will be our fault. It is the government that has to guarantee that the water does not reach us rotten, ”replies Mayor Acero. Catalonia has been mired in bad water for decades: seven out of ten aquifers are contaminated, a long way from meeting the target set by the European Commission of full decontamination by 2027.

The Generalitat does not dare set a date for solving the problem, but trusts that a filter change at the water treatment plant will decontaminate the water. And for the future, a new catchment point is to be found in another swamp without pollutants. He now charters tankers every two days so the neighbors can fill jars. However, the mayors complain that in the middle of a heat wave in some municipalities, the liquid arrives as early as noon.

And between the crossfire of the administrations, the neighbors complain about misinformation. None of the twenty people interviewed between three locations knows what day or what time the next tanker truck will arrive. Josep Vives, a 62-year-old resident of La Granadella (population 700), uses his mobile phone to show a municipal edict published at 10:50 a.m. announcing the arrival of the truck an hour in advance. “Do you think my 85-year-old mother has to lug bottles around quickly to get water?” he asks. “This is the Third World,” he concludes.