24 hours in Cuéllar, the city of Segovia, to enjoy suckling pig and mudéjar 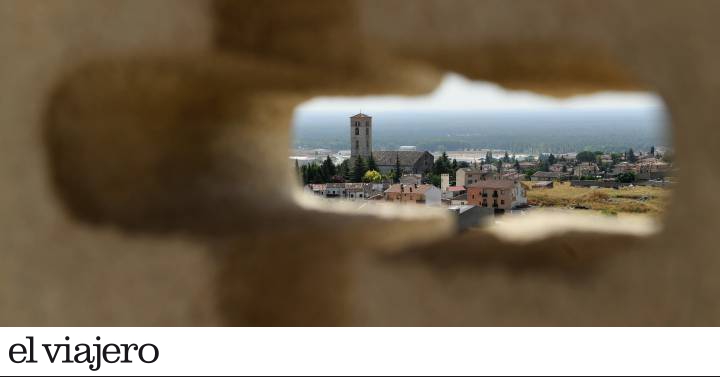 “A Mudéjar island in a sea of ​​pine forests” is Cuéllar’s tourist slogan. And it’s true. We are in the Tierra de Pinares region, one of the largest expanses of resinous pine in Europe. and we’re in cuellar, where there are so many monuments of this style that one cannot visit them all in a single day: it would be boring and we would not do anything else, hardly eat. On this route through the city of Segovia, we suggest seeing six or seven, which is good. And there will still be time to visit other things and eat a roast suckling pig and pine nut pasta, to name two typical products from the sea… From the sea of ​​the pine forests, of course.

9.00 Walk along the Fishermen’s Path

Just before Cuéllar, at exit 57 of the Pinares Motorway (A-601), is the Segoviano Bridge, where the the fisherman way (1), an incredible path that runs upstream along the river Cega as if passing through a tunnel opened with a machete in the lowland forest of poplars, alders, birches, ash trees, willows, hazelnut trees, blackthorns, hawthorns, honeysuckle, ivy and ferns of more than two meters high. You have to rub your eyes: it’s a river crossing the (theoretically) arid Castilian plateau, so green even in summer it seems photoshopped. It is a circular route, well marked, of a few hours.

At eleven in the morning the guided tours of the Castle of the Dukes of Alburquerque (it is advisable to inquire about and reserve visiting hours by telephone; 921 14 22 03) (two). It is the tallest, most colorful and most emblematic building in Cuéllar, it was the residence of kings (Pedro I, María de Molina, Enrique IV, Juan II…) and owned by such powerful lords as Álvaro de Luna and Beltrán de la Cueva and, after many vicissitudes, became a secondary school and a tourist office. Particular attention must be paid to the south-east door, Mudéjar, from the 12th century; and also the splendid Patio de Armas, its colossal columns and its double gallery with low arches from the 16th century. Theatrical castle tours take place on Saturdays and Sundays at 11:00 a.m. and 5:00 p.m.

two kilometers away ramparts Cuéllar had, a small part of it, closest to the fortress (3), has been restored and can be walked along the sidewalk. Walking along the almost 400 meter long southern part gives the best view of the castle with the Keep of Remembrance in the foreground. Later we enjoy the green of the Huerta del Duque Park (4) and the pine forests that surround this Mudéjar island like a sea. And at the end we will see the city from a swallow’s perspective, with its upside down tiles (as is usual in Segovia), its sgraffito facades and its many churches, including those of santiago, which lies directly at our feet and of which only the apse remains. A Mudéjar apse, not to vary.

The walk continues down the wall and approaches that Churches of San Martin (5) and from Saint Stephen (6). San Martín houses the Mudejar Art Interpretation Center and San Esteban, four fabulous 16th-century Mudejar tombs with polychrome plasterwork and alabaster sarcophagi. Its apse, considered the pinnacle of the Castilian Mudéjar, overlooks the old Jewish quarter like a brick prow. In the turbulent seas of medieval Spain, Cuéllar was an island of coexistence where Jews, Moors and Christians might not have loved each other, but they tolerated each other.

A little further down, at number 9 Calle del Colegio, we will admire them Palace of Pedro I (7), one of the best surviving examples of civil Romanesque in Spain. For them we will arrive at the main square (8th), There is an excellent example of vernacular architecture here: several timber-framed stone and adobe houses on the second and third floors and with projecting eaves of Muslim influence. Here is the one too old prison, a 16th-century building that now houses the town hall, with a beautiful Gothic-Renaissance courtyard.

From the Plaza Mayor we will leave Calle de San Pedro and stop there to buy pine nut pasta the helium biscuits (9), where they’ve been making them since 1949; and for dinner, it’s time in Saint Peter’s refectory (10), in the old Gothic church of the same name. The roasts in the wood-fired oven are its forte, like most of the restaurants in Cuéllar. Suckling pig and also suckling pig.

100 meters from San Pedro Refectorio, on Calle de la Concepción you would have them 18th century (eleven), now an interpretation center that explains the process of transforming hides into leather. The tanneries were here, outside the walls, because you couldn’t stand the smell of them. Today this street smells divine, especially at number 42 where it is the Pastry delights (12), An establishment that produces the city’s most typical and famous sweet: the delicacies of Cuéllar, tea cakes stuffed with chicory cream and pine nuts, in the shape of Mudéjar bricks.

Nine out of ten products the store sells Enjoy in Cuéllar (13) They have the Food of Segovia quality mark: sausages, cheeses, legumes, wines, beers, even chili sauces from the province. Other desirable trade in products gourmet it is The study (14), Note, however, that this facility only opens in the mornings. Another stop is the pottery workshop Lola Velasco (fifteen), in Calle de San Julián No. 3. The also ceramist Alfonso Laguna (16) He shoots his plays in the courtyard of his house on Calle del Carmen, next to the apse of the Church of Santiago. To see it you must call 646 21 46 27.

Everyone is talking well (there must be a reason) about the restaurant The Traviata (921 14 04 71) (17) and its cuisine prepared with modern techniques. in the The brasserie (18) Excellent grilled meats are served for dinner, especially beef, but also lamb skewers. If you don’t mind taking the car because they are a bit far away, you can walk the hay meadow (921 14 17 22) (19) or to Florida (twenty). The latter is also a good hotel. Not a bad option to stay overnight either. The dawn of the hay field (twenty-one), a country house next to the Sanctuary of Nuestra Señora del Henar, another site on the parched Meseta that is unsettling for its greenery.