17 years of same-sex marriage: LGTBI activists reflect on what has been achieved and what is still missing 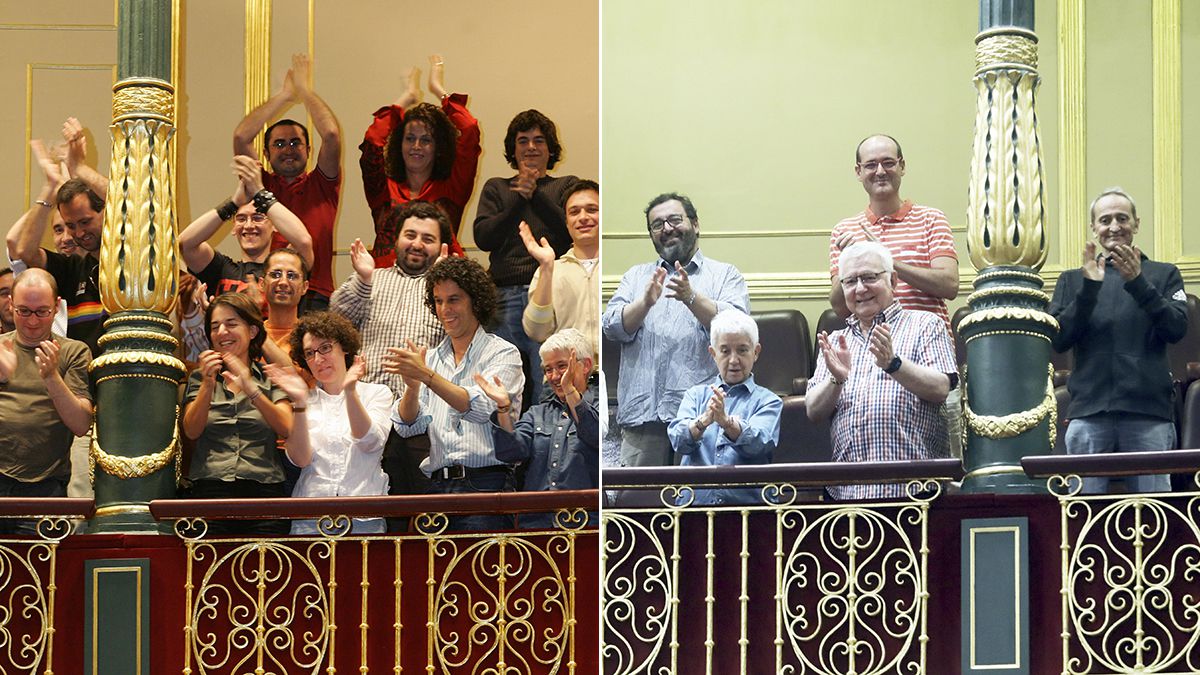 The memory flooded the Congress of Deputies this Tuesday morning, Pride Day. In the semicircle, it has returned to April 21, 2005 to commemorate a transcendental moment in Spanish history: Congress’ approval of equal marriage. Several generations of LGTBI activists have gathered to recreate the EL PAÍS cover photo at the time, in which representatives of the group, including the late Pedro Zerolo, celebrated the approval of the measure that made Spain the third country in the world to legalize same-sex marriage . Among those in attendance was Beatriz Gimeno, a rights activist for the LGTBI collective and now a United We Can MP in the Madrid Assembly, who championed the law 17 years ago as President of the National Association of Lesbian, Gay, Trans and Bisexual People (FELGTB) . “Everyone who is here is a guarantee that there are new and new activists and that there are people who have joined the fight,” he said. “Especially at a time when the fight must go on. It’s not like everything has been achieved as we might have thought a few years ago,” he added.

In the Congress Chamber, the photographer Uly Martín is preparing to repeat the photo he took 17 years ago. Cell phone in hand, he compares the old photo with the scene in front of him. It takes a few minutes to remember the exact place where those present were then (since 2005 the room has been renovated and everything is not the same as before). Martín guides her with his hand to line up the shot: first a little to the left. Then a little to the right. Suddenly, applause erupted from the ranks. Everyone present joined in the celebration. Martín captures the moment, thus returning to April 22, 2005 in Congress on June 28, 2022. At least for five minutes. You feel the joy felt in that moment and the nostalgia for the years that have passed since then. The law noted the absence of Pedro Zerolo, considered one of the main advocates of extending the right to marriage and adoption by homosexual couples in Spain. He died of pancreatic cancer in 2015. A hole was actually left for him in the photo.

For Blue Rodríguez, a 22-year-old non-binary and spokesperson for FELGTB Trans Group, it was a “very exciting” moment. He recorded it and uploaded it to his Instagram Story with a caption that reads, “Repeat historic moments.” For Blue, the generations of activists who have preceded him have marked “a roadmap” for his generations and generations to come. “It’s important to be very aware as a young person of what we’ve achieved because it serves as a precedent to know what we can achieve and what we don’t have yet, which would be trans lawthat is within our reach,” he said. “But also think about the laws that are yet to come, because we believe that everything will be settled when we get the transgender law, but there are still a lot of very invisible groups,” he added.

Blue’s real name is Aaron, but for the past few months he’s preferred to be called Blue because he doesn’t have to specify “pronouns” that way. “With Blue, I can just be myself,” he explained. Although she was born in 2000, before same-sex marriage was enacted, she grew up with the right to marry whoever she wants. And being raised and educated with this guarantee has made him aware of all the rights the LGTBI community has yet to conquer. “It’s important that people who were there 17 years ago give us the space to be there now,” he said. “I think it’s very beautiful that in this praise for this historic moment they give way to the youth fighting for new historic moments.”

Both Blue and Gimeno agree that Tuesday’s act represented the fact that there is a generational shift in this fight. “We young people are here and we want to learn from people who have been fighting for a long time. They inspire us and help us see that there are other rights that can be achieved,” said Blue. And he added that his generation doesn’t want to take anyone’s position away: “I don’t want to be Carla Antonelli, I don’t want to be Silvia Jaén. I want to learn from them, I want them to teach me how to be myself and how youth can achieve all the things that these wonderful people have achieved.”