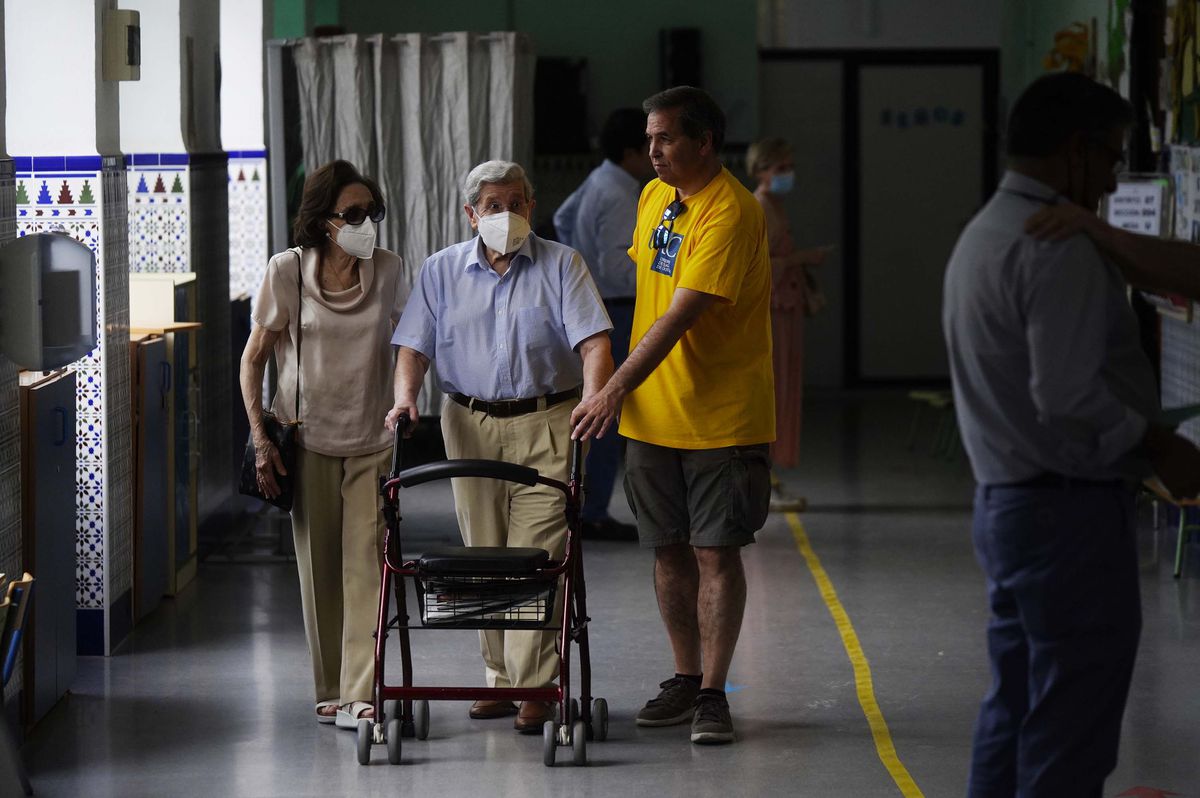 According to the Junta de Andalucía, 15.4% of the voters in the Andalusian elections this Sunday had gone to the polls by 11:30 am. The result, which cannot be compared to the 2018 election as no data is available, implies that 980,793 people voted then, based on data from 99% of polling stations. These elections, brought forward by five months by the President of the Junta de Andalucía, Juan Manuel Moreno, coincide with the beginning of the summer and take place after a heat wave. The candidates appeal to the voters. “Vote first and then continue on Sunday,” Moreno demanded. The popular candidate has in recent days expressed his fears that the weekend trips to the coast will delay the voting of some Andalusians and eventually they will not return in time to exercise their right. Teresa Rodríguez, candidate for Adelante Andalucía, has also urged Andalusians to go to schools en masse and vote freely: “That they use the gaps between going down and going down to the beach to cast their vote.” Polling stations are closing 8:00 p.m.

The Junta de Andalucía is offering three participation times this Sunday, June 19: at 11:30 am, at 2:00 pm and at 6:00 pm. The first data cannot be compared with the result of the 2018 elections, since this parameter was not provided at that time. In the Castilla y León elections held on February 13, these first turnout data were also reported and could not be compared to the previous elections either. Elías Bendodo, Advisor to the Presidency, reported at his first appearance at 10:30 a.m. that all polling stations were set up normally. The only notable incident was the delay in the formation of four tables in three schools in Sanlúcar de Barrameda (Cádiz) because the members of the tables did not show up. In this case, they were replaced by the alternate and primary voters. In addition to Minister Bendodo’s appearances, the Andalusian Government reports the dates of these elections through a dedicated website and the 19J Andalusian Elections 2022 application.

Turnout in the 2018 elections was 58.65%, one of the lowest in Andalusia regional elections as only 3.6 million people turned out to vote. These elections were won by the PSOE with 33 seats, but the government pact between the PP (26 seats) and Ciudadanos (21), with parliamentary support from the Ultras of Vox (12), led Juan Manuel Moreno Bonilla to become President of the Board, although he was not the candidate of the party with the most votes. The extreme heat this weekend, the celebrations in numerous cities and the attractiveness of the beaches have made those responsible on the board fear that participation will fall again this Sunday.

This Sunday in Andalusia the opening of 3,795 polling stations with 10,189 tables has been ordered so that they can exercise their right to vote if they so wish, a total of 6,641,856 eligible voters, an increase of 1.5% compared to the 2018 election census Of the total number of eligible voters, 6,378,352 live in Andalusia and 263,504 abroad, while of those residing in the Community, 302,450 are new voters who can exercise their right to vote for the first time at the age of 18.

Correos has accepted 176,598 applications from citizens to exercise their right to vote by mail in this Sunday’s election, a 98% increase compared to the last regional election.

More than 10,600 Civil Guard officers and almost 6,300 members of the National Police, with the support of the Junta de Andalucía unit and the local police, will guarantee the right to vote for all Andalusians. Thousands of local security force agents will complete the device.